Edit Post
Tami and Jeff came to visit last weekend! We had a ton of fun going around the Farmer's Market, walking down State Street, shopping at all the bargain stores, eating out at all the best places, then putting Jeff, the electrician, to work all day on Sunday... It was quite the adventure. Otto and Jeff woke up, ate a little breakfast then started up with the work, while Tami and I chilled in the living room... out of the way... and left the men to their own devices! 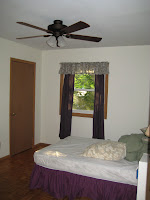 Our guest bedroom now has an overhead light and fan!!! 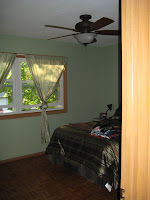 And our master bedroom also have an overhead light and fan!!! They also went around and switched the outlets to the child safe outlets! And they even put power in the garage... and somehow they ended up putting in 6 outlets in our two car garage... a little excessive, if you ask me... but at least we have power! Wonderful job Jeff and Otto!! 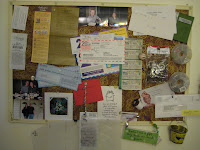 Here's the bulletin board we recovered with fabric last year at the apartment. Works great to hold all my loose papers! 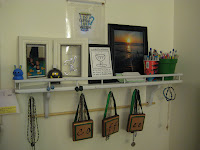 This was a shelf that was over the sink when I moved in. It has a plate display ledge, hooks to hang something from and a bar for something... It was worthless to us. I, instead, had Da install a book shelf for cookbooks and a light attached underneath to see when washing dishes in the sink. So I had this thing laying around... I finally decided it could make a great addition to the Art Studio! It's very useful! I get a shelf to show things off with, and hooks to hang other things from... as for the bar... still working on some ideas for that. 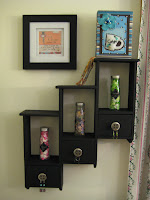 This is a shelf I bought at Goodwill recently. It was stained... and badly... and it had fish for knobs... I thought, "I can do something with this!" I sanded it down, painted it matte black and bought new knobs for it! Looks super duper! And I get more area to display things! 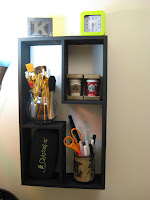 But one shelf was not enough! I bought another one! This one was laminate with that plastic covering... so I just sanded it to give it a rough surface, then painted it matte black! Turned out awesome! And I have it over my work table to hold tools and displays even more things!!!

But most recently, Friday, I decided to stop at Michael's before heading to an event at Archiver's just to see what they had... well out in the clearance section they had this picture frame hook. It said it was only $1.97, but when I checked out it came to be $.01!!! ONE CENT! And once again I thought, "I can do something with this!" 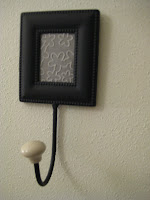 Today I painted it matte black. Then, since it was missing the glass and backing for the picture area, I used my new embossing plates for the Big Kick and just embossed flowers on gray paper. I then used a Veramark Marker to discolor the area around the flowers. I cut it to fit in the window and viola! I love it!!! 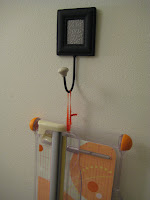 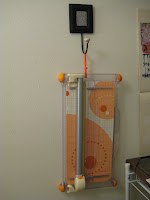 It works great to hold my Rotary Cutter!!! Now if only I could find some more...