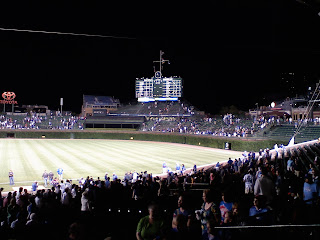 Sad. :( They lost, but at least it's a pretty field at night!


This is from the Drinking Made Easy Tour we went to with the Newman's! Heather and I were so stoked that we got to meet Zane Lamprey from Three Sheets!!! Check out the photos!!

Edit Post
So, some of you may know that I participated in a Bake-Off this past weekend. It took a while to decide if I was actually going to enter or not... the reasons:
In the end, with 4 days to spare, I figured out an excellent idea! And so I registered, paid the entrance fee, and went home to wonder what I was thinking...

I had a grand plan! I would practice my idea the weekend before the competition so people could taste test the combination and give me input at the Pilsner Party we hosted for the release of Otto's newest brew. So, I made the cupcakes, played around with the frosting and worked on how best to build them. Then I had everyone test them all out for me! 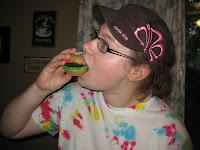 Here's Veronika taking one for the team! She bravely delved into the cupcake to give me her opinion... and the consensus of everyone... ? Delicious, fun and very creative!

I broke it into phases.

Phase One: Baked both batches of cupcakes!

Phase Two: Leave the house and hang out with friends!!! (Thanks Natalie & Rob)

Phase Five: Create a station where I can cut cupcakes, frost and assemble!

Phase Six: Plate everything up onto the platters I bought!

Phase Seven: Submit my creation at the park in time for judging!!!

I would have to say that this whole "Phase" thing worked out well! I kept my sanity and nothing went wrong!!! So, Sunday morning I woke early, plated my cupcakes and then got ready for the day. I left the house giving myself 10min of leeway. I checked the address on the GPS, and then looked it up on GoogleMaps; both gave me the same address for the name of the park I was supposed to drop-off my cupcakes at, so I took off with a kiss from Otto and a freshly brewed cup of coffee!

I get to Verona, follow the GPS to the park, and there is nothing there... I'm on the verge of panic attack when someone in a purple shirt starts walking towards the car. Turns out she works for the event and this is not the right park... it has a new name... and I need to drive to the other side of town. I was assured that I would not be late, and they would be waiting for me. Eventually I found where I needed to be, and was directed to park and met the fellow who would tell me where to go from there. I found out I had to walk about 2 blocks through a ravine, down a hill, up a hill and through the fairgrounds... all I kept telling myself was, "If I drop these cupcakes I'm going home in tears!" Luckily I made it there in one piece, checked-in and decided to sit around and wait for the judging.

Turns out the judging wasn't that exciting... They would walk the entry around, then come back with a piece for the judges to try and then the judges would write on their papers. And I was surprised to find that there were 8 judges!!! 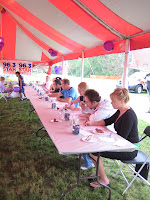 And I was very interested in how they were gonna cut up the cupcakes to divide among the judges... luckily I brought more than just the 2 cupcakes they required to split among everyone! 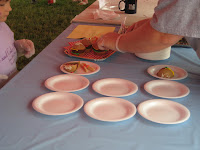 Well, while the judges did their thing, and realized it wasn't as exciting as I was hoping, I got a chance to meet a couple who had entered some pies in the competition. We spent most of the time just talking and hanging out... and then we find out that they aren't going to give out the results until later in the day... around 2pm, which was like 3hrs away, so we switched business cards and left to do other things.

I ended up going with Otto, Kerry & Scott to the Botanical Gardens, and then to Daisy's Cupcakery!!! We came back to the house to play some cards and have dinner, but around 6pm I decided to hop onto my email and found a message from the couple that I had met at the Bake-Off. They were congratulating me for winning Grand Champion in the Bake-Off and letting me know that my 3 trays of cupcakes sold for a total of $60!!! I was amazed! 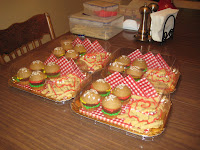 Here I made some cupcakes for a good cause, and because it was fun!! And I win! 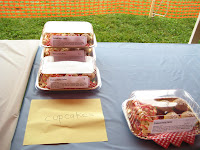 To top it off, this morning I brought some extras to work, and I find out that Star Country was talking about my cupcakes on the radio!!! You can even go to their website and check out the photo gallery from the auction!!!

And then I find out there are awesome prizes!!! 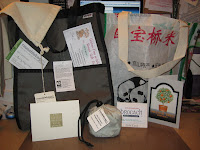 There were multiple bags from Reusablebags.com (one made from a rice bag, a cotton produce bag, bags that fold up very tiny and a huge one made from recycled plastic).

And a one night stay at the Concourse Hotel!

I would have to say that I'm happy I entered the event, and it raised money for a good cause!!! 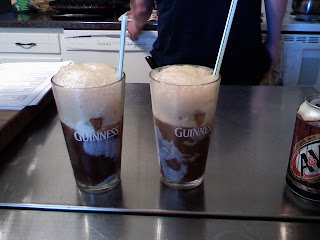 I'm walking around Target in

Edit Post
I'm walking around Target in a green shirt and I was mistaken as an employee. I kindly pointed the woman the right way and just smiled. Lol