Edit Post
Work
Tuesday: Since this week is our W week I decided to plan with another classroom to have a Water Day! I had this brilliant idea to create a water slide!! I bought a black sheet of plastic, brought out some of ours tables (which were extremely heavy) and some of the chairs to hold down the edges of the sheet. This is what it looked like: 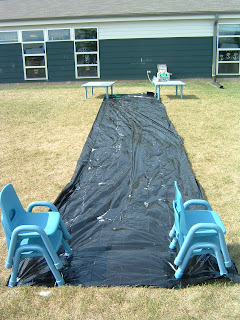 At first the kids didn't understand how to use it, although I kept trying to explain it to them. In the end I just took off running and showed them how to use it! It was a blast! Although as time continued I unfolded the sheet completely. In the picture I had folded the sheet in half, but we ended up needing the whole width! Some of the kids really used it to its full potential, while others wanted nothing to do with it. Will I do it again? Of course! Because I couldn't get enough of watching some of them sit down and scoot on their bottoms all the way to the end!

Wednesday: Anyone who says working with kids isn't hazardous has obviously never had a chance to work with kids! I was dealing with a child today... one who likes to scream at the top of their lungs, hit everyone (including teachers) and throws food. I told this child they needed to sit in the chair we have in the hallway until they can handle being in the classroom again. The child, of course, refused to sit in the chair. I pointed to the chair and said, "I need you to show me you can come back into the room by sitting on this chair." But before I could continue she lashed out and scratched me on the arm. I pulled my arm away, shook my head at and said I was sad that they treated their friends this way. I then walked back into the classroom and looked at my arm. I had some really nice scratches! Nothing drew blood, but my skin decided to react immediately!! I looked my arm over and took inventory of the number of scratches and the damage done. At the reaction I was getting I started getting worried. I quickly went over and asked the child if they had a cat (because I have bad skin reactions from cat). Luckily they didn't own a cat! But my arm still have some really nice marks that were refusing to go away. At least this morning I can't really see them anymore!

Madison
Gas prices jumped from $3.09 to $3.32 in one afternoon! I was astonished! And extremely angry!! Seriously! How can the price jump so dramatically in a matter of 4 hours! I'm not kidding when I say 4 hours, either. I went home for lunch, and when I came back to work it still said $3.09, but when I went home 4 hours later it had sky rocketed!!! Now, a day later, the price has slowly slipped down to $3.28... like that makes me feel better (oozing sarcasm). I'm really not so fond of Wisconsin gas prices.

Extra
We finally set up our Wii last night. We waited because we had a ton of things we needed to get done before we introduced another distraction into our environment. So, after dinner I got to put everything together and set it up. Otto was off talking on the phone with a friend, so I kept myself busy by trying out the game we rented! Eventually he got off the phone and we played games for a good hour! Tonight we'll probably play some more and try out some of the other aspects of the system!! I like how small the whole set up is!! You can hardly even tell we have it unless you're really looking for it!!!